After the November 8 election the Board of Supervisors will shift to a 5–6 minority of progressives.  Progressive winners were Sandra Fewer of D1, Aaron Peskin of D3, Norman Yee of D7, and Hillary Ronen of D9.  Jane Kim in D6 is the fifth progressive.

Suppose progressive leaders like Aaron Peskin and Jane Kim were active supporters of Kim Alvarenga in D11 and Dean Preston in D5.  [Alvarenga lost by 413 votes at 51%–49%.  Preston lost by a small margin as well.]  If the progressive leadership had been united behind them, that probably would have made the difference.

Nov 28 SF moderates win control of Board of Supervisors

Nov 27 The Tom and Tim Show: No more Teflon — Let’s hold all of our our politicians accountable for what happened on Election Day
Listen to this informative (and humorous) podcast by Tom Ammiano and Tim Redmond, covering local Supe races and more.

Last year SFBARF tried to take over the Sierra Club SF executive committee and were soundly defeated.  This year they are trying again under the name “Yimby Party,” with a huge cash infusion from real-estate/tech.  Their full-color mailer went out recently with the confusing title “Save the Sierra Club!” and listed their “stealth slate.”

Don’t be fooled by this pro-real-estate slate.  If you are a Sierra Club member vote for the slate of environmental leaders:  Sheila Chung Hagen, Becky Evans, Katherine Howard, and Linda Weiner.  Voting is open now until Friday, December 16th.  Click here for more info.

San Francisco’s Official Response to the Election of Trump:

The San Francisco Board of Supervisors recently passed a resolution, introduced by Board President London Breed, in response to the election of Donald Trump. The resolution reads as follows:

WHEREAS, On November 8, 2016, Donald Trump was elected to become the 45th President of the United States; now, therefore, be it

RESOLVED, That no matter the threats made by President-elect Trump, San Francisco will remain a Sanctuary City. We will not turn our back on the men and women from other countries who help make this city great, and who represent over one third of our population. This is the Golden Gate— — we build bridges, not walls; and, be it … [read more]

An editor at HuffingtonPost.com attaches the following note to articles on Trump:

Editor’s note: Donald Trump regularly incites political violence and is a serial liar, rampant xenophobe, racist, misogynist and birther who has repeatedly pledged to ban all Muslims — 1.6 billion members of an entire religion — from entering the U.S.

The Jill Stein Presidential recount can proceed in Wisconsin, Michigan, Pennsylvania.  The recount will need more donations since on Monday WI upped the cost by $2.5 million.

The first Friday evening of each month North Beach art galleries are open to all.
Open galleries
View the map here

Organized by District 3 Supervisor Aaron Peskin’s Office in partnership with the SF Dept of Public Works.
DPW will provide bags & trash pickers, and we’ll provide the positive energy to walk through surrounding streets and alleyways to clean up the ‘hood.

Follow rangers and staff on a walk from Chinatown to San Francisco Maritime National Historical Park. Learn how early 20th century immigrants from Chinatown got jobs working in the salmon canneries, voyaging on the park’s historic cargo ship Balclutha, from SF to Alaska. Take in the bustling streets of Chinatown while learning a bit of Maritime history. NOTE: The walk will continue along city streets and will end at the Hyde Street Pier. This program will be translated into Cantonese by a live translator.

No Dig, Nov 14: Your input needed for Francisco Park and Crooked Street

The Francisco Park Conservancy and San Francisco Recreation & Park Department are co-hosting a series of community meetings to collect public feedback, and meeting #2 is coming up soon.

At this meeting, we will present some of the progress made since our first community meeting in September, and provide another opportunity to give your thoughts and ideas. Please join us to make your voice heard!

Light snacks will be provided.
*Please note that there is no parking available at the facility.

If you are unable to make this community meeting, we encourage you to complete our online survey (https://www.franciscopark.org/october-2016-survey/) on the features you feel are the highest and lowest priority for the new Francisco Park. Please also share this survey with your friends and neighbors so we gather as much community feedback as possible.

Please join Captain Lazar for his monthly meeting. This is a great opportunity for the community to share their questions and concerns with the captain.

Holy Guacamole!  Real-estate and tech money is flowing into District 1 and District 11 Supervisor races, making opponents of Sandra Fewer (D1) and Kim Alvarenga (D11) rich as heck.  As of this writing each opponent has about $1 million! 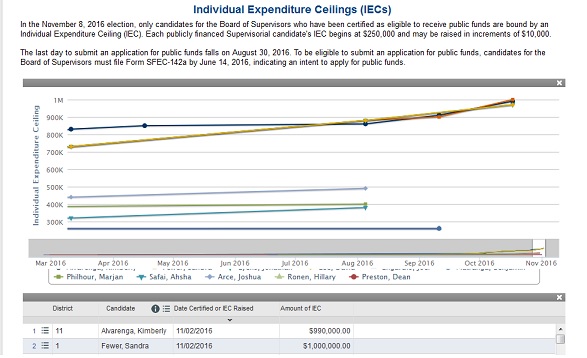 Real-estate and tech interests, including SF and Silicon Valley tech moguls, and SF realtors, have given generously to buy a Board of Supervisors seat.  They have set their sights on District 1 and District 11.  See this October 14 story that traces the money, from the tech or real-estate donor’s check to the 3rd party or IE fund.  Note that in the article the $375K of 3rd party money in each of the D1 and D11 campaigns, as of mid-October, has grown to about $700K each as of November 2, with more being added each day as Nov 8 approaches.

What you can do: Donate money, door-knock or phone on behalf of Sandra and Kim.  People on the ground will make the difference in these Supervisor races.  Show up at their campaign offices shown below, anytime up to Tuesday November 8, and they will put you to work (and feed you ;-):

Nov 1 — The sleaze reaches high tide in SF election
The big-money lies are staggering.  Phony Bernal slate card, Ahsha Safai’s bogus D11 affordable housing project, real-estate backed “Parents PAC” supports Wiener, and “keep in mind that almost everything arriving in your mailbox may be paid for by some of the worst players in local politics.”

More at In the news.

Find your polling place, and other info at SF Dept of Elections

Each currently has about $400K backing from Real-estate/tech interests: Ron Conway, Airbnb, Salesforce, and every tech giant in the area.  This backing could increase dramatically for each candidate by Election day.  This is three times the funding that the “Three Moms” each have.

For news stories on the huge real-estate/tech cash infusion into SF 2016 ballot candidates and measures see the Oct 14 stories at In The News.

The bottom line: Ed Lee and his backers want to buy at least one Supervisor seat.  Are they doing this because they care about the people who live in Districts 1, 9, and 11?  Heck no.  They want to shift the balance on the Board of Supervisors to non-progressive and push through legislation that benefits real estate, Airbnb and other tech and “Company Town” interests.  Unfortunately, this will be at the expense of residents of Districts 1, 9, and 11 who want a Supervisor who will look after local needs.  The loss of the progressive majority on the BoS will also affect all San Franciscans, especially renters who fear losing their homes to real estate speculation and getting priced out by an influx of the wealthy.

Do you remember the last time Ed Lee and his backers tried to buy the election for a District Supervisor? 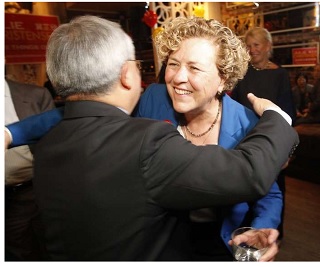 Ed Lee and Julie Christensen, his appointed D3 Supervisor who lost her bid for a full term to Aaron Peskin. Photo from Election day 2015.

Right, Julie Christensen who was District 3 Supervisor for 11 months and voted in the BoS as directed by Mayor Ed Lee and his backers.  There was one occasion at a BoS meeting where she said she had decided earlier to vote Yes (on a progressive measure) before she decided to vote No.  Expect the same if one of the Mayor’s chosen Supervisor candidates is elected.

Christensen and Ed Lee lost to Aaron Peskin in 2015.  All the money showered on Christensen and Lee couldn’t overcome the power of District 3  residents and their friends walking the precincts and phoning voters.  Gotta do that again this election.

What you can do

Support the ‘Three Moms” even if you do not live in their Districts.  There are lots of opportunities to walk or phone for them — Check the Calendar.  You can also donate to their campaigns:

During the next few days we have to work as hard as we can to keep the progressive majority on the BoS.  Please join me and others, visit Districts 1, 9, and 11 (each with their own sort of San Francisco charm) and campaign for the “Three Moms.”

What is ReCoTown? This blog recently wrote about “Moderates” and several readers pointed out they are anything but moderate.  They are real estate, tech and corporate interests whose first priority is making money off of San Francisco real estate, and making sure the city will continue to house their high-paid workers while pushing out regular folks who have lived here for decades if not their whole lives.  The word ReCoTown (Real-estate/Company-town folks) comes from Real-estate and “Company Town,” the title of a new documentary about a divided San Francisco in the 2015 election.

Since last week things have heated up in SF elections for Supervisors, State Senate, and ballot measures.  Check out the numerous election news items.

Confused by all the letters of the alphabet for measures that will take hours to understand?  Vote the Easy Way – Vote No on P O U R Q – no pork!  Vote Yes on all other measures.